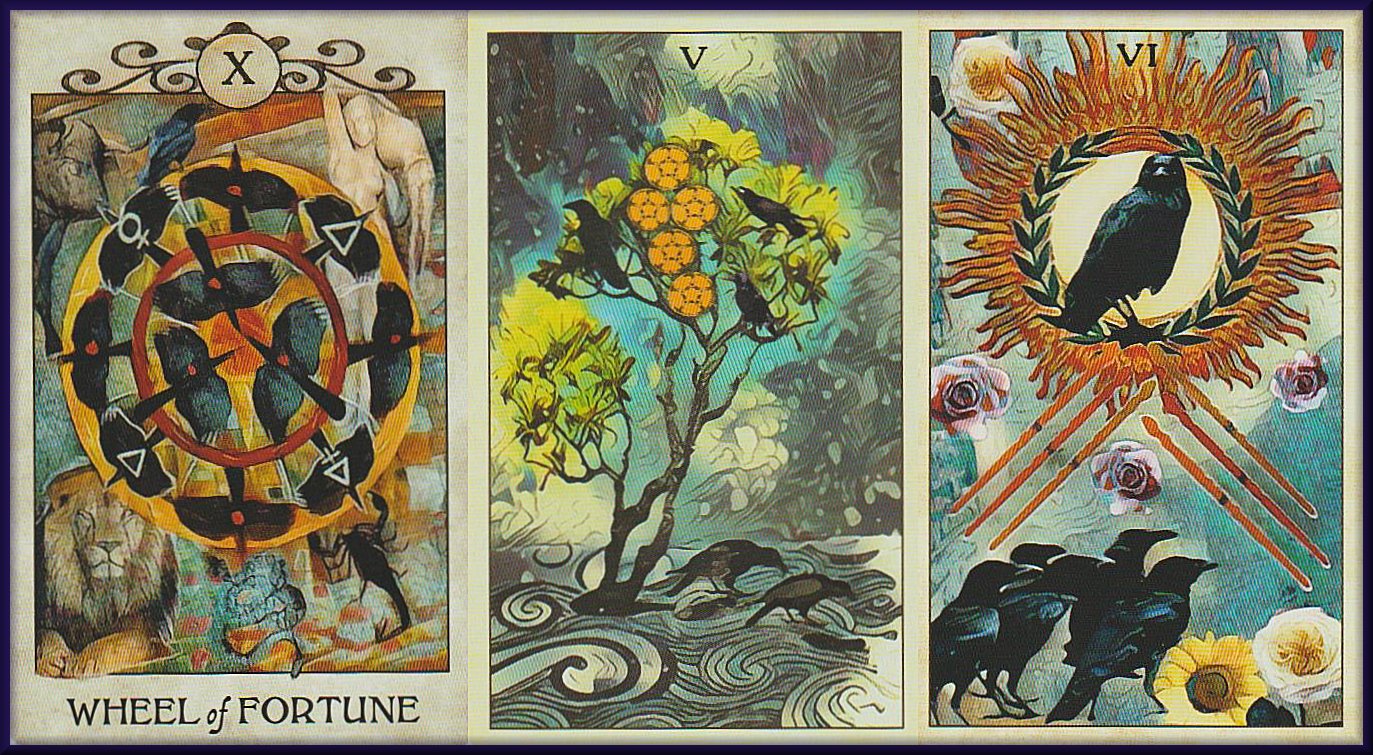 With the Crow Tarot by MJ Cullinane

No wind stirs this slumbering morn,

The scent of dew floats on the mists,

All is quiet in the dark forest deep

The clearing still in slumber sleeps,

Before the creatures of the wood awake,

Not a sound, even a hushed breath makes.

Forth from the horizon low,

To chase the darkness across the sky

Noise from the clearing you begin to hear

The young demand their hunger slaked.

And the Crows begin to circle on high

Cawing and calling they announce their intentions,

To bring one and all, too many to mention.

The Council of Crows was then brought to order,

The members of six all perched in a row

To discuss business urgent – an all quiet is called,

For silence is needed when it’s time for the vote.

The first Crow then opens his beak and he speaks,

Of feathers so black they shimmer with blue,

Of his voice that’s oh so velvety smooth,

Of his beauty and wisdom he is quite certain,

Surpasses all others, no one would dispute him.

At first, all was quiet, no one utters a sound

As the Crows’ words floated down to the ground,

For no one was certain they’d heard correctly

The Crows’ motion he had delivered so deftly.

No second was heard as all looked around

That he was the wisest, the blackest, and best to be found.

The chipmunk and squirrels began to chatter and moan,

And the birds and the bees flapped and buzzed in a drone,

The deer and the bear loudly snorted and stared,

While the skunk’s turned their backs with their tails in the air.

As the council sat waiting, the noise level rose,

The protest was growing, as you would suppose,

To deafening heights the decibels climbed,

The clearing erupting in sounds of wartime.

No matter how long the Crows tried to hush,

The clamoring and squawking, of even the Thrush,

No one would listen to the call, “Come to order!”,

As everyone present could not believe the horror.

Who did these Crows think that they were?

Proclaiming that they the most perfect creature by far,

Than all other creatures gathered in the deep forest dark,

Their boasting and bragging seemed quite a lark.

The noise continued all through the day,

The Crows giving up, now flown away,

But the debate continued down on the ground,

As more creatures gathered from all around.

Each faction believing that they were correct,

In believing that they were the popular sect,

For being declared the wisest and best,

Than all other creatures called on by behest.

As the night creatures stirred in the gloaming light,

And all the day walkers tire and yawn,

As their bedtime approaches before the next dawn.

What’s left of the Council will now soon retire,

For the night and the shadow have crept, the day to expire.

Now the Owls begin to circle on high,

While the day creatures sing their night lullabies,

And the Owl Council calls all night creatures nigh.